The Nigerian Electricity Regulatory Commission (NERC) has threatened to withdraw the licences of eight electricity distribution companies (DisCos) over an alleged breach of market rules.

In a notice signed by Dafe Akpeneye, commissioner for legal, licensing and compliance, on Tuesday, the regulator accused the DisCos of breaching the provisions of the electric power sector reform act (EPSRA).

The commission said the DisCos failed to meet up with the expected minimum remittance to the Nigerian Bulk Electricity Trader (NBET) for the July billing cycle. 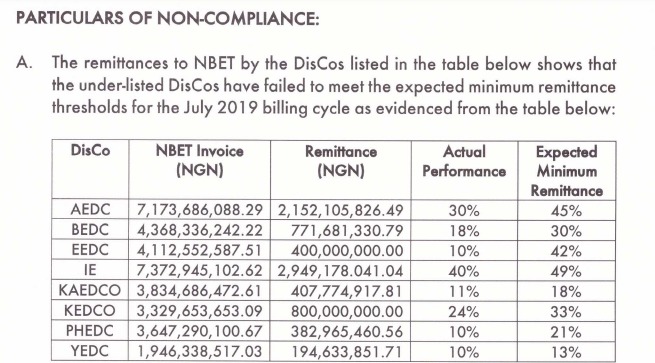 “The Commission considers the actions of the aforementioned DisCos as ‘manifest and flagrant breaches’ of EPSRA, terms and conditions of their respective distribution licences and the Order; and therefore requires each of them SHOW CAUSE in writing within 60 days from the date of receipt of this Notice as to why their licences should not be cancelled in accordance with section 74 of EPSRA,” the notice read.

“All DisCos are obligated to settle their market invoices in full as adjusted and netted off by applicable tariff shortfall approved by the commission.

“The DisCos are liable to relevant penalties/sanctions for failure to meet the minimum remittance requirement in any payment circle in line with the provisions of its respective contracts with NBET, MO and provisions of the market rules and supplementary TEM Order.”