Atiku said this in a felicitation message to Obasanjo on his 83rd birthday anniversary.

According to Atiku, nobody has done as much as the former president did for Nigeria.

Atiku, who was Obasanjo’s deputy for eight years, thanked him for his commitment and contribution to the progress and development of Nigeria.

“As you turn 83 today, my family and I felicitate with you and thank God for your life. No individual living or dead, has bestrode the Nigerian political space as positively and purposefully, as you have done, for good and better, in peace time and war, in times of austerity, and times of prosperity,” Atiku wrote.

“It is not an exaggeration to describe you as the preeminent political colossus in Nigeria, a nation that owes so much to you. Indeed, many Nigerians would read about your birthday on their GSM devices, which are one of your legacies to the Nigerian people.

“Your love for Nigeria and commitment to her unity, good governance and stability has prevented you from retiring, a sacrifice that my family and I deeply appreciate.

“From The Congo, to South Africa, to Angola, to Liberia and Sao Tomé and Principe, your democratic finger prints on the African continent is indelible. You have served and still serve as a beacon of democracy and a guardian of constitutionality.

“Nigeria owes you a debt that we cannot pay, because you led us to pay the foreign debts that we could not imagine paying. By that singular action, you planted trees for generations yet unborn.

“You hold the enviable and esteemed record of being the first African military ruler to have voluntarily, and without internal and external pressure, restored power to the government democratically elected by the Nigerian people. It was Not Your Will to be in office, but it was your will to bequeath democracy to Nigeria. And after 21 years of the Fourth Republic, Nigeria has cause to celebrate your democratic credentials.

“Happy birthday President Obasanjo. You are beloved now and forever.”

Dear Chief Olusegun Obasanjo, as you turn 83 today, my family and I felicitate with you and thank God for your life. -AA #OBJ83 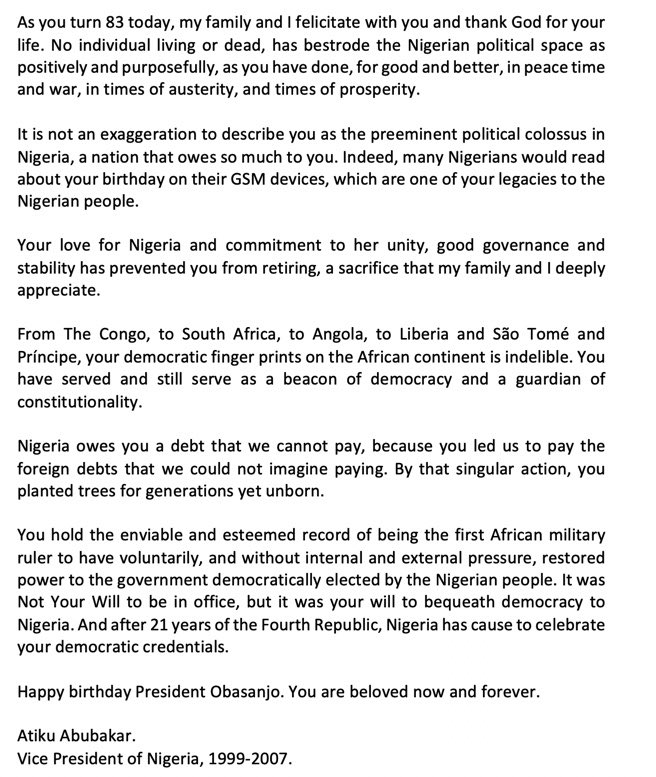 832 people are talking about this

Atiku fell out with Obasanjo during their second term in office. But they later reconciled.

In the build up to the 2019 presidential election, Obasanjo endorsed the candidature of Atiku who was the standard bearer of the Peoples Democratic Party (PDP).