Christian Chukwu, former coach of the Super Eagles and one of Nigeria’s greatest footballers ever, will travel to the UK for further treatment in the first week of May following the footing of his medical bills by Femi Otedola, the billionaire businessman.

Otedola had offered to foot the bill of the former captain of the national team following reports that he was battling with prostate cancer.

The $50,000 cheque was presented to Chukwu on Wednesday morning in Enugu by Philip Akinola, the COO of Zenon Petroleum and Gas Ltd, one of Otedola’s companies.

Otedola confirmed the development to TheCable.

“The governor just called to thank me immensely and I spoke with Christian Chukwu too. He will be flown abroad next week. I told him he will be fine and I will make sure he is provided with the best health services,” Otedola told TheCable on phone.

Chukwu, with support from the Enugu state government, has already done an initial surgery in Nigeria and has been recuperating.

Aside captaining Nigeria to its first Africa Cup of Nations success in 1980, Chukwu also led the Enugu Rangers FC team that won the Africa Cup Winners Cup in 1977.

He was nicknamed ‘Chairman’ for his authority on the field as a central defender.

Chukwu also served as assistant coach of the first team to win a FIFA World Cup trophy for Nigeria – the Golden Eaglets that triumphed at the FIFA U16 World Cup in China in 1985.

He was also assistant coach of the team tagged the Golden Generation – the 1994 class of Super Eagles that qualified Nigeria for its first FIFA World Cup finals.

As assistant coach, he helped Nigeria win the Africa Cup of Nations title and reached the round of 16 at the FIFA World Cup in the US.

Between 2002 and 2005, Chukwu was head coach of the Super Eagles, leading the team to bronze medal at the 2004 Africa Cup of Nations in Tunisia. 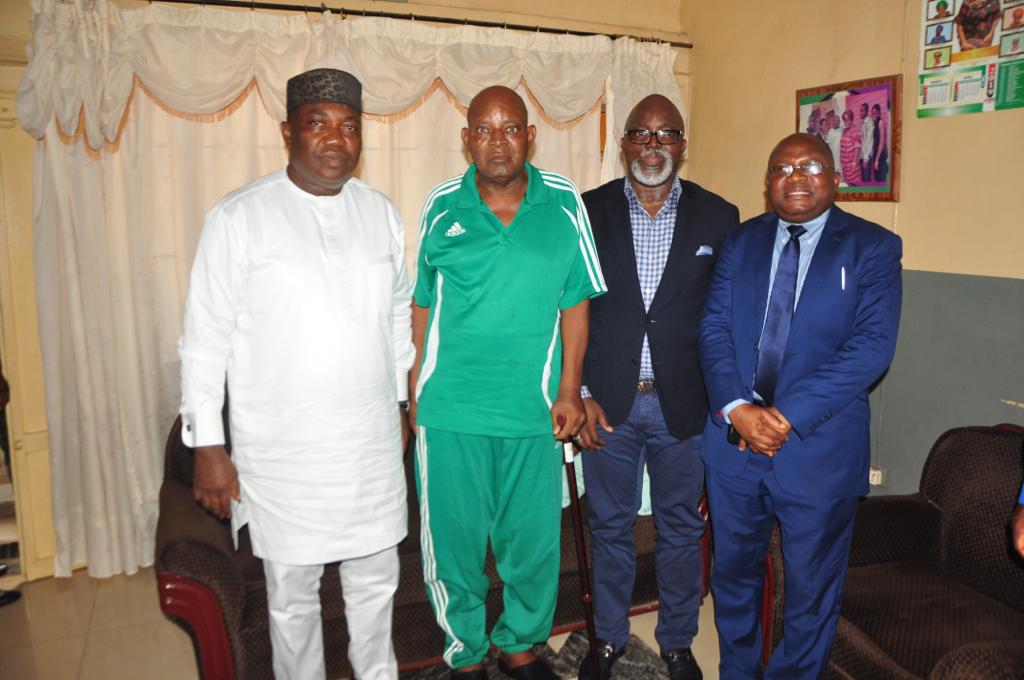 Ugwuanyi, Chukwu, Pinnick and Akinola… after the cheque presentation